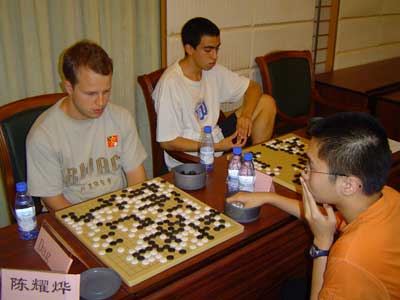 Newsgroups: rec.games.chinese-chess
From: Josef Pieper ...@bluebottle.com>
Date: Fri, 09 Nov 2007 22:35:14 -0500
Local: Sat, Nov 10 2007 4:35 am
Subject: Eastern Mind vs. Western Mind: Go vs. Chess/Xiangqi
Reply | Reply to author | Forward | Print | Individual message | Show original | Report this message | Find messages by this author
To Whom It May Concern:
I have been researching the question of habits of mind and culture as
being promoted by and/or reflected by certain board games.  In
particular, I have been investigating whether weiqi/go is representative
of the “Asian mind” and whether international chess is representative of
the “Western mind.”
Apparently, I am not alone in raising this question.  Analysts in
political and military fields have been suggesting that weiqi/go, in
particular, is emblematic of a particularly Chinese world view, rooted
in Chinese philosophy and the Chinese practice of diplomacy and war.  In
contrast, international chess (along with poker, boxing and American
football), have been proposed as expressive of a generically Western and
particularly American world view, grounded in assumptions about conflict
systematized in a magisterial fashion by Carl von Clausewitz in the 19th
century (with roots going back much further) and largely vindicated by
American experience throughout the 20th century and still being refined
by Americans in the 21st century.
The writers I have reviewed argue that achieving “victory” depends
upon which “game” one is playing.  Paradoxically, one’s opponent may be
playing an entirely different game.  One is ignorant of such a datum at
one’s peril.  Specifically, Americans have been playing chess, poker,
boxing and football (as examples of “force on force” games) in military
and diplomatic arenas, while the Chinese have been playing weiqi/go.
Consequently, the future may well belong to the Chinese, as weiqi/go
emphasizes the wisdom of long-term strategy and planning and the rich
rewards of patience.  Several authors urge the West, and Americans in
particular, to familiarize themselves with weiqi/go and thereby the
Chinese mind, in order to understand and compete with an opponent who
might otherwise be incomprehensible and therefore undefeatable.
In pursuing this line of research, I have made use of a martial
arts analogy.  I've read that one can develop a Tai Chi body and state
of mind, or a Hsing-I body and state of mind or a Ba Gua body and state
of mind.  Do weiqi, xiangqi (Chinese chess) and international chess,
mutatis mutandis, develop states or habits of mind and cultures that are
unique to them?  If I were to force the analogy, I would say that weiqi
is like Tai-Chi, with fluid movements.  International chess is like
Hsing-I with its direct lines of attack and its emphasis on control of
the center.  Xiangqi is like Ba Gua with its emphasis on maneuver.
As recently as 2004, the Strategic Studies Institute published a
monograph that exhorted the study of weiqi/go as a means of
understanding strategic conflict with China.  I trust that you will find
this excerpt to be illuminating:
“The philosophy behind chess is to win decisively. For the winner,
victory is absolute, as is defeat for the loser. In chess, both players
have the same clear and overriding objective―capturing the opposing
king―and accomplish this objective by decimating whatever opposing
forces are standing in the way. In go, total victory usually happens
between two mismatched players. That kind of victory, as Sun Tzu puts
it, is not the pinnacle of excellence. In a go game between two
well-matched players, the margin between win and lose is usually very
small, often decided by only a few points.  The philosophy behind go
therefore is to compete for relative gain rather than seeking complete
annihilation of the opponent’s forces.  It is dangerous to play go with
the chess mindset. One can become overly aggressive so that he will
stretch his force thin and expose his  vulnerable parts in the battlefields.
In chess, the focus is on the king. All the moves are geared toward
checking the king. In designs to capture the king, chess players always
try to eliminate the powerful pieces such as the queen, knight, castle,
and bishop. Chess players typically focus on these powerful military
units as the ‘center of gravity’ and ‘decisive point’ (in Clausewitz and
Jomini’s terms). Naturally, chess players are single-minded. In go, it
is a war with multiple campaigns and battlefields. There is no one
single focus on the board. A go player must always keep the whole
situation in mind. Attacking the opponent’s strategy therefore is much
more appropriate in go. As a prolonged and complex game, go players
focus on building or creating rather than chess players’ emphases on
removal and destruction.”   (David Lai, “Learning From The Stones:  A Go
Approach To Mastering China’s Strategic Concept, Shi, pp. 28-29)
As early as 1969, a junior fellow of the Society of Fellows of
Harvard University advocated the exploitation of a weiqi/go paradigm
(“the protracted game”) as a means of at least understanding if not
contending with Maoist China (and by implication, Vietnam):
“Any school of strategic thought, whether Chinese Communist or
Clausewitzian, contains two intellectual elements:  on the one hand,
universal pan-strategic principles; on the other, axioms which are the
distinguishing features of the particular system and which represent the
empirical and subjective conclusions of its exponents.  The function of
the wei-ch’i model is to provide a systematic methodology for analyzing
and structuring the contingent elements of the Chinese Communist
strategic system.
The importance of this function may be illustrated by the following
passages from an essay Fung Yu-lan, one of modern China’s leading
philosophers.  As already mentioned, the hsiang-ch’i referred to is the
Chinese equivalent of Western chess; both wei-ch’i and hsiang-ch’i are
generically called ch’i.  Wrote Fung:

Turning to the shortcomings of the Chinese intelligentsia of the
early republican period who failed to recognize the problems of Chinese
society, Fung proceeds:

‘This is just like someone who only knows how to play wei-ch’i and who
does not know that there is more than one kind of ch’i, who, when he
sees the opening position in hsiang-ch’i, cries, “How can you start like
this?  You’re wrong, you’re wrong!”  Again, seeing a piece move, he
criticizes, “How can you move a piece already played?  You’re playing
illegally.”  When the wei-ch’i people of this world, who don’t know
hsiang-ch’i, criticize it in this fashion, it can truly be said to be
the funniest thing in the world.’ (Fung [Feng] Yu-lan, “Hsin Shih Lun
[Changsha:  Commercial Press, 1940], pp. 66-67.)

The problems confronted by American, and in fact, all Western
statesmen, soldiers, and scholars in dealing with the People’s Republic
of China or with Maoist strategy in general are precisely those of the
hsiang-ch’i player faced with a wei-ch’i game and a wei-ch’i strategy.
All too often the Western reaction resembles that implied by Fung
Yu-lan:  suspicion, confusion, and contempt.  ‘Know yourself and know
your enemy,’ said Sun Tzu; ‘one hundred battles, one hundred victories.’
As a means, if only partial, to knowledge of the Chinese Communist
player, understanding of the protracted game is a critical adjunct for
the Western side in all strategic situations of Sino-Western conflict or
accord.”  (Scott A. Boorman ,“The Protracted Game:  A Wei-ch’i
Interpretation of Maoist Revolutionary Strategy,” pp. 183-184.)
I am not writing as a political scientist, a military strategist or
a diplomat.  I am writing as a game player, seeking counsel from other
game players.  Do you find the notion that board games can establish
habits of mind and frames of reference and can form, reflect and
interpret cultures to be credible?  Perhaps even persuasive?  If so,
what should we as parents, educators and policy makers be doing in terms
of the promotion of game playing among our younger generation?  Do these
considerations motivate you to study any of these games more
intensively?  Why or why not?
I thank you for your time and attention, and I look forward to your
responses.

asaa money market antonio
5.50 in us money
a bank full of money

Drug Testing Pipe Welding Certification
cheapest strattera
The medication does have the potential for overdose, so it is important for those taking the medication to ensure they take the dosage that their doctor prescribes for them.
[url=http://www.searchrockypointrealestate.com/]cheap generic strattera[/url]
It is a medication that has been on the market for several years and is available under the trade name as well as in the generic form.
http://www.searchrockypointrealestate.com/ - atomoxetine without prescription

Thank You For This Post, was added to my bookmarks.